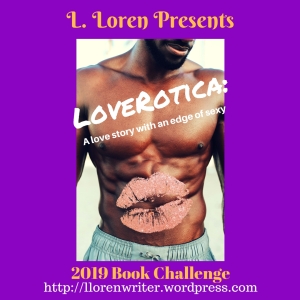 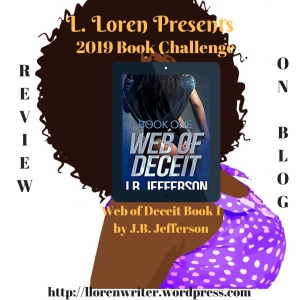 I am a little late posting this, but us is here now! Forgive me for my tardiness. I’ve been in my writing cave trying to get my Christmas novella finished. Anyhoo, I have finished reading this week’s book by J. B. Jefferson titled, Web of Deceit – Book 1. It falls under the Written by a man category for the challenge.

William and Naomi are a married couple presumably in love, living the good life in Las Vegas. On the cusp of their sixth wedding anniversary, William discovers odd behavior by his breathtaking wife, causing him to suspect she is cheating. Instead of confronting her, he decides to hire a private investigator to dig up evidence. If he can prove his suspicions, William will save himself from paying Naomi 2 million dollars because of a prenup. If she makes it to the day after their sixth year anniversary, she gets the money – proof or no.

The sneakiness of William put me off from his character. Though I did not blame him for doing it, it just left a bad taste in my mouth. He seemed more concerned with his money, which he has plenty, than his marriage falling apart. Not once did he express his hurt or unhappiness about the suspected betrayal. His first and seemingly only though was about his bank account. Most men would be pissed that their wife was giving up the goods to another man. For that reason I had trouble liking his character. I think there is more than meets the eye with this man.

Now don’t get me wrong, I don’t condone cheating. And Naomi is a big old garden tool! She has a lover that she utilized frequently! Apparently she has a sex addiction and can’t get enough. All I can say about her is at least she only had one lover. I have to hand it to her, though. The woman is smart. The lengths she goes through to remain hidden is good. She is a definite trickster and able to go back and forth between her husband and lover seamlessly. She did slip up by underestimating her husband. He has proven to be just as cunning.

Just as the twist in the plot started happening the book ended. I am curious enough to see what happens next to get book 2 in the series. This was a good read. The author is very talented and his descriptions of the world he created are engaging. It is my first time reading his work and I enjoyed it very much. Four kisses for this one!

To read Web of Deceit for yourself click here!