This week’s selection for The LoveRotica Book Challenge is a new book from new author Ronyea Thompson called ‘The Circle’. I have seen this book everywhere online. Even the independent store Mahogany Reads Cafe where I also consign my books has been inundated with requests for the book. They can’t seem to keep it on their shelves. So when I heard the buzz, I decided to read it to see what all the hype was. 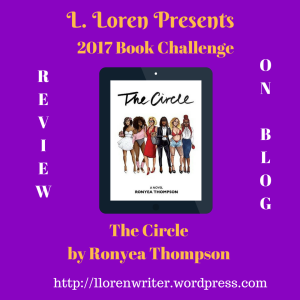 Have you ever had a group of close girlfriends and none of you had a moral compass?

To me that’s what happened in ‘The Circle’. Let’s see there was a stripper named CC who not only danced, but made a habit of sleeping with her clients in the back room for that extra cash. Oh and she had a bit of a coke addiction too.

There was the narrator, Robin who owned her own publishing company, but one lazy afternoon allowed her niece in law to eat her out in her marital bed, and never told her husband. In fact she tried to forget the whole incident even happened.

Then there was Rashida, a choreographer who chain smoked weed and cheated on her husband at the drop of a dime, using the excuse that she was trying to further his career by sexing influential people in the entertainment business. It was such a shame because her hubby was dedicated to her.

Natalie was the good girl house wife who never really cheated on her older husband, but maintained a close relationship with a man from her past. She did eventually tell her husband about it, and he was astute enough to know they would end up together after he died. The husband was fighting cancer.

Patrice was a professor at a college who was sleeping with her student and planning on giving him a grade based on his d game. It turned out old boy was married and the wife was a pregnant soldier who was deployed. Patrice found out she was pregnant too, but she decided to terminate.

Lastly we have Keisha, who was hell bent on getting married, but knew she wasn’t in love with her fiancé. She pined away for her ex, who inserted himself back into her life once he found out she was engaged, which she wholeheartedly welcomed and tried to keep secret from her man.

I tell you, this group of friends was a mess, but they stuck together and had each others backs no matter what. It was a good read, but I failed to connect with any of the characters. That is very rare for me. I was torn between a 3 and a 4 kiss rating so I settled on 3.5. Of course in my world that rounds the rating up to 4 kisses.